When the Solution is Simpler than the Problem

Your Work Life and Career

When the Solution is Simpler than the Problem

Back in the 1960’s there was a cosmic rivalry commonly known as the “Space Race” with the USA and Russia battling to put the first man on the moon.

When NASA started launching manned spacecraft they found out that their astronauts couldn’t use pens to write their essential notes and observations whilst in space.

The ink wouldn’t flow down through the pen in a zero-gravity environment.

NASA decided to recruit and retain a man named Paul Fisher to design a pen that would work in space.

Much research and a mere $1.5 million later, they had their solution to the problem.

NASA now had a pen that worked in zero gravity, in a vacuum and in freezing temperatures.

Of course, the Russian cosmonauts had the same problem.

So they used a pencil!

Now, this anecdote isn’t entirely historically accurate and is more of an “urban legend”.

The reason that the story is so widely embraced though is that it rings so true.

We often use massive amounts of time and effort looking for and creating elaborate solutions to problems when a simple answer is right under our noses. 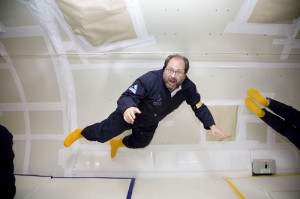 So what’s that got to do with performing at our best?

When was the last time you said to yourself “Why didn’t I think of that?” when someone came up with a brilliantly simple solution to something?

What is it that they had that you didn’t?

It tends to be one of 2 thinks; either clarity or perspective.

When we are “stuck in a problem” and “can’t see the wood for the trees” we have neither.

When you read those two phrases again you’ll understand how difficult it would be to move to a different perspective if we were literally stuck or clearly see anything else if we were staring at the trees.

If you find yourself going around in circles trying to find a solution to a problem, stop!

It’s time to take some time out.

Step one is to take time away and relax to get some space back in your head to gain clarity, literally clear your mind of junk.

Second is to find a different perspective.

Think of a few people whose opinions or successes you admire, you don’t even have to know them personally it could even be a public figure.

What would they say or do?

If it’s someone you know, ask them.

What new solutions have you discovered now? Enjoy experimenting with this technique.